How is it possible for a lake to be at the top of a mountain, and doesn’t dry up during the dry season, how? This was the question I asked when I first heard about the mystic wonders of Ado Awaye. A suspended lake is a lake that is housed at the top of a mountain. The name of the mountain ‘Ado Awaye’ was gotten from a community situated at Iseyin, Oyo state. Ado Awaye is relatively a small bubbling town with a wide view of natural sceneries and dispersed placement of rocks around it.

During the one-day tour trip carried out by traveldenng, an online lifestyle travel agency, I was opportune to know all that I was curious to know about this tourist site. The route to the suspended lake on the mountain is adorned with notable historical wonders that make it a must-see. 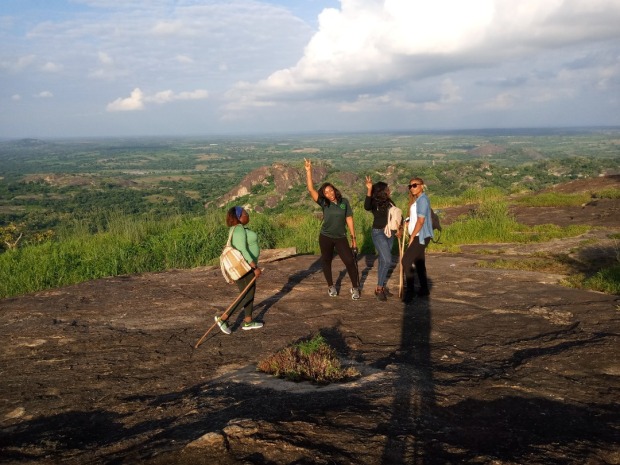 Here are the 5 things you need to know about Ado Awaye:

a. The first wonder every tourist would see is the Ishage rock which is also an idol that people worship. It balances one of its small edges and it has never fallen all through the century which makes its sight awing. The Ishage rock is also known as the bringer of rain. According to our tour guide Mr. Wasiu, when there’s a drought in the community the chief priest visits the mountain to wrap a white cloth around the Ishage rock. Later that night there would be a heavy downpour in the community.

b. Esè àwon Àgbà this means prints of the elders. These giant footprints are almost everywhere on the mountain. It is believed that these deep prints belonged to gods that lived on the mountain and protected the entire community from danger.

c. Agbómofúnyàké, in English this means ‘collects child and give to the lake’. It is a deep hole with a small circumference at the left corner of the lake. No one is allowed to put their foot into it because believed that the person would be drawn into the lake. Our tour guide told us the story of a Whiteman who visited the lake and dipped his foot into the Agbomofunyake hole, after several warnings. The Whiteman was dragged into the lake by unknown forces. After  several attempts of trying to pull him out by people who were present during the incident. Till date, nothing hasn’t heard of him.

d. After the lake, further into the mountain, there is a tree called ‘the Elephant Tree’. History has it that this tree fall many years ago. Then it formed the exact looks of an elephant. My first glance at it from afar seemed like a real Elephant until I went closer to clear my doubts. Tourists are allowed to climb and take pictures on it.

e. The last wonder on the mountain is the ‘Esèkan Kun’ meaning the verge of death. We couldn’t get to this part of the mountain because of time. But tourists who succeeded to get to that point are always advised to write their names on the mountain with stones, a sign for conquering.

4. Estimated time for Hiking: it took us about one hour to get to Iyake Lake on the mountain from the moment we started hiking. There are 350 built steps leading to the Lake. From Iyake Lake to the Elephant Tree was about 13 minutes.

5. Locals Reception: the people of Ado Awaye are aware of their tourist site and the attraction it brings. They are always on the lookout for visitors and tourists. So they have become very  friendly and hospitable. Do not be surprised when they stare at you bemusedly, it’s  a sign they are happy you’ve come to see their land.

You should watch my documented video to understand the experience I had with my other travel partners.Tap here.

Thanks for coming by, I’ll see you when next I see you on the blog.

2 thoughts on “5 Things Everyone Should Know About The Only Suspended Lake in Africa, Ado Awaye Mountain, and Its Historical Wonders”